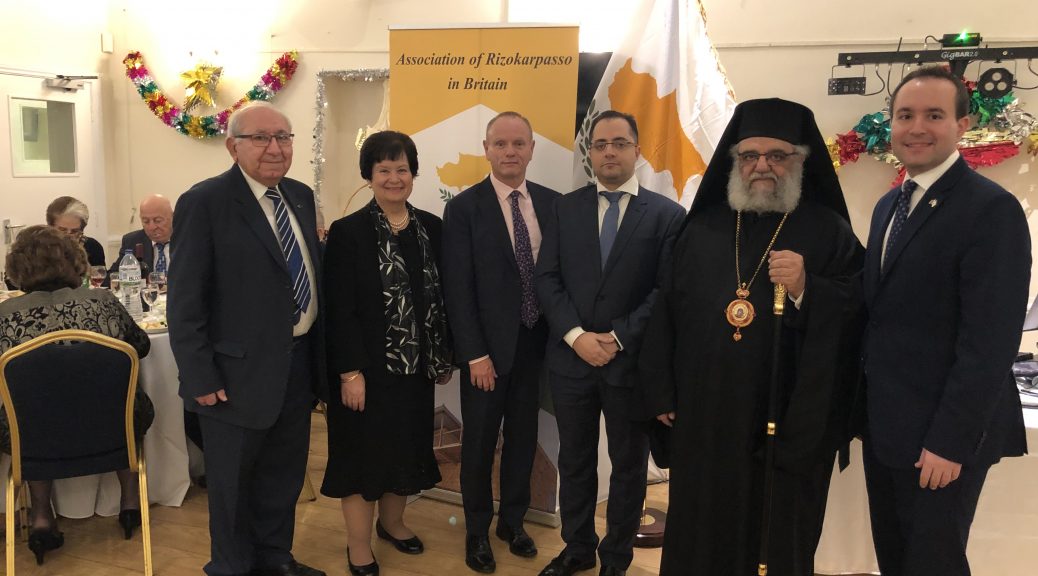 On Saint Andrew’s Day 30th November,the Association of Rizokarpasso in Britain held its annual Charity Dinner and Dance at the Greek Cypriot Brotherhood. All age groups were represented, ranging from 2 to 97 years of age, proud of their roots and not prepared to forget that Rizokarpasso belongs to them.  Present amongst the guests were the Consul General of the Republic of Cyprus in the UK, Theodoros Gotsis, The Rt. Revd. Bishop Athanasios of Tropaeou, the Parliamentary Candidate for Finchley & Golders Green, Mike Freer, and the President of the National Federation of Cypriots in the UK, Christos Karaolis. The evening began with a minute’s silence to remember, pay tribute to and show respect for our much loved and highly respected Archbishop Gregorios of Thyateira and Great Britain.

People ate a delicious traditional souvla meal, danced and enjoyed the company of friends and relatives at the Greek Cypriot Brotherhood in what was a truly, family and friends orientated joyful community atmosphere.  The music had toddlers to pensioners on the dance floor and in fact the pensioners were the last to leave the dance floor at the end of the evening.

Maria Karaolis, the President of the Association of Rizokarpasso thanked those present at the Charity Dinner and Dance saying that they, together with the brochure advertisers and the providers of raffle prizes and donations had, once again, enabled the Association to send, via the Cyprus High Commission, a €50 Christmas present to each of the 46 schoolchildren enclaved in Rizokarpasso. She said that they were proud of the enclaved Rizokarpassides and the successes of their children but also remembered their hardship and sacrifices for 45 years since the 1974 Turkish invasion.

Mrs Karaolis said “despite Turkey’s decision to test its new Russian made air-defence system Turkey is still considered by our Government and other Western nations to be an important NATO ally that holds the key to Western security and the control of migration.  Turkey wants to join the EU yet muzzles democracy, imprisons Government critics, closes down media outlets and imprisons its journalists, it fails to abide by Agreements, ignores the Geneva Convention, ignores UN Resolutions, mistreats its religious and ethnic minorities.  The Kurdish minority community is 25% of Turkey’s population.  In the last few months Turkey has invaded and occupied northern Syria, which was mainly inhabited by Kurds and is now engaged in demographic engineering by so called “repatriating” Arab Syrian refugees into occupied northern Syria, which has brought fierce criticism from Turkey’s international allies.  Turkey does not share our Western interests or European values of democracy, respect for human dignity and human rights, freedom, equality and the rule of law. Turkey says that it wants the negotiations on Cyprus to be successful yet engages in aggressive actions by violating the Republic of Cyprus airspace and Exclusive Economic Zone with its warships and drill ships obstructing the Republic of Cyprus right to exploit its own natural resources. Turkey insists on keeping its troops in Cyprus and keeping the anachronistic Guarantor Power for Cyprus.  The Republic of Cyprus is an independent country and a member of the UN, the EU, the Commonwealth and is a valued, stable, reliable, democratic, ally in a very volatile region; it doesn’t need Guarantors”.

She expressed the hope that talks would resume in a manner that could lead to a just, viable and lasting solution that will reunify the island, terminate Turkey’s illegal actions, which are a violation of the sovereign rights of the Republic of Cyprus and against international law, and allow all of the Cypriots to live together throughout the island in a peaceful and safe Republic of Cyprus.

She asked people to look at the model of Apostolos Andreas Monastery, (placed in the conservatory at the Greek Cypriot Brotherhood two days before), built in 1992 with loving care, devotion and precision by the late Christakis Christodoulou, who died in London in 2010.  He was born in Rizokarpasso in 1945. The model was donated by his family via the Association of Rizokarpasso to the Greek Cypriot Brotherhood for people to admire and remember St Andrew’s Church and Monastery located on the tip of Cyprus, near Rizokarpasso, in occupied Cyprus.  A present to all to celebrate St Andrew’s Day.

She wished everyone a Happy Christmas and a New Year, 2020, full of happiness, prosperity and good health; a New Year that brings Freedom, Joy and Justice throughout Cyprus.