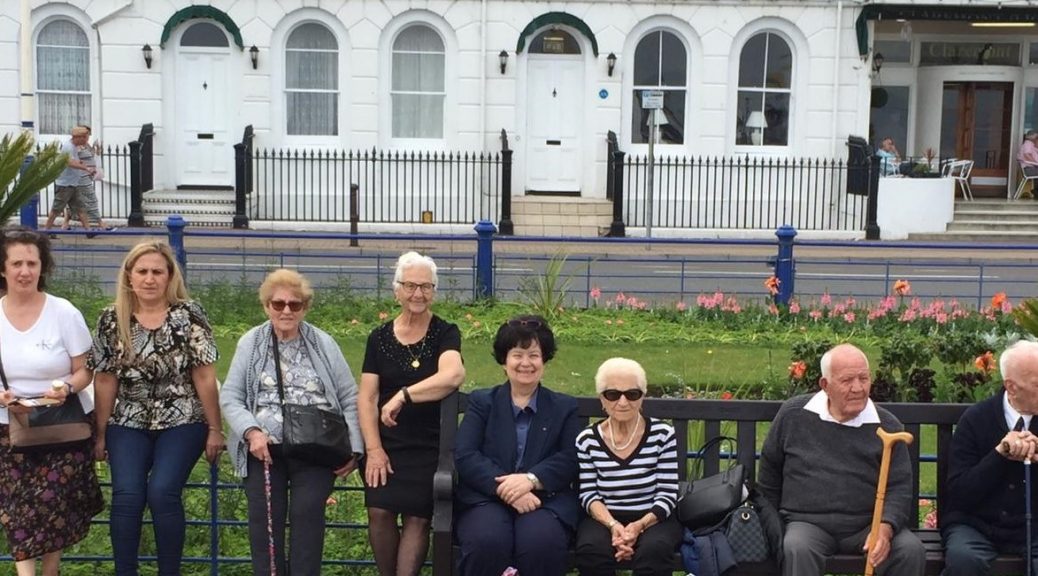 Eastbourne was the destination this year for the annual summer seaside trip for the members of the Association of Rizokarpasso in Britain. The group gathered and boarded their coach near the Cypriot Community Centre, Wood Green. On arrival everyone enjoyed the traditional seaside lunch of Fish & Chips at Qualisea Restaurant.

After lunch they appreciated the nice weather and fresh sea air and spent the afternoon either relaxing or walking along the seafront. However, some took advantage of the shopping opportunities in Eastbourne, which has a large shopping area with many well known shops as well as a street market. Before boarding the coach for the return journey most indulged in ice cream and/or doughnuts, declaring that they would diet the following day.

The coach journey was made more enjoyable with Greek music and people singing Greek songs e.g. “To Yelekaki”, Yialo YIalo”, “Samiotissa” led by the melodious voices of Keti and Andreas.

Anastasis, who at 97 is our oldest Association member, has a wealth of knowledge about our unforgettable Rizokarpasso and its families; he has always been a staunch supporter of the Association and never misses an outing or an event.

Members took the opportunity to exchange family information, recount memories of Rizokarpasso, and express their desire to return to their homes and properties in Rizokarpasso. They remembered the sacrifice of the remaining 228 enclaved Greek Cypriots in Rizokarpasso, whose numbers have declined over the years from over 3,000 Rizokarpassides prior to 1974. All said they wanted to send the NFC letter to their Members of Parliament  to seek their support for justice for Cyprus and to remind them of the 45 years of Turkish occupation of northern Cyprus, the continued violation of the Exclusive Economic Zone of Cyprus and the latest announcement that Turkey is sending a second drilling ship, Yavuz, this time to a drilling site off the Karpas peninsula.  Many will attend the NFC annual Parliament event for Cyprus on Tuesday 17th July. The Association’s next opportunity for family and friends to meet will be at the Association’s Dinner and Dance at the Greek Cypriot Brotherhood on Saturday 30th November.