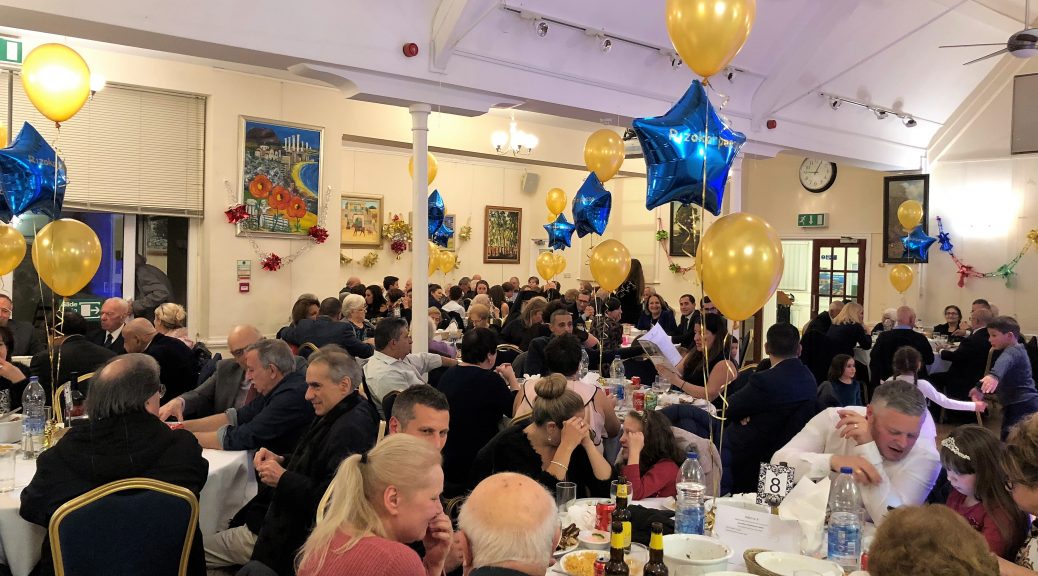 The Association of Rizokarpasso in Britain on November 24th held its annual Charity Dinner and Dance at the Greek Cypriot Brotherhood, which it filled to full capacity. All age groups were represented, ranging from 1 to 96 years of age, proud of their roots and not prepared to forget that Rizokarpasso belongs to them.   The music had toddlers to pensioners on the dance floor, in what was a joyful community atmosphere where people ate a delicious  traditional souvla  meal, danced and enjoyed the company of friends and relatives at the Greek Cypriot Brotherhood. Zacharias Koullas and guests came to London from Brighton to enjoy the evening.  Present amongst the guests were the Deputy High Commissioner of the Republic of Cyprus in the UK, Nicholas Manolis, The Rt. Revd. Bishop Athanasios of Tropaeou, the Member of Parliament for Finchley & Golders Green, Mike Freer, and the President of the National Federation of Cypriots in the UK, Christos Karaolis.

Maria Karaolis, the President of the Association of Rizokarpasso thanked those present at the Charity Dinner and Dance saying that they, together with the brochure advertisers and the providers of raffle prizes and donations had, once again, enabled the Association to send, via the Cyprus High Commission, a €50 Christmas present to each of the 48 schoolchildren enclaved in Rizokarpasso. She also spoke of the hardship and sacrifices of enclaved friends, relatives and compatriots in Rizokarpasso, who, since the 1974 Turkish invasion and continued occupation of the northern part of Cyprus, have been denied the basic human rights and freedom that all other European citizens enjoy as well as suffering violence and intimidation, which had reduced the Greek Cypriot population of Rizokarpasso from around 4,000 people in 1974 to less than 250.

Mrs Karaolis stated that Turkey muzzles democracy, imprisons Government critics, closes down media outlets, imprisons journalists, fails to abide by Agreements, ignores the Geneva Convention, ignores UN Resolutions, mistreats its religious and ethnic minorities, including the sizable Kurdish minority community which is 25% of Turkey’s population.  Turkey does not share Western interests or European values of democracy, respect for human dignity and human rights, freedom, equality and the rule of law; it violates the Republic of Cyprus airspace and Exclusive Economic Zone. Turkey’s anachronistic Guarantor Power for Cyprus should end; its illegal occupation of Cyprus should end and Turkey should withdrawal its troops and illegal settlers from Cyprus and allow the return of all refugees to their homes and properties.  The Republic of Cyprus is an independent country and a member of the UN, the EU, the Commonwealth and is a valued, stable, reliable, democratic, ally in a very volatile region. She expressed the hope that talks would resume in a manner that could lead to a just, viable and lasting solution that will reunify the island, terminate Turkey’s illegal actions, which are a violation of the sovereign rights of the Republic of Cyprus and against international law, and allow all of the Cypriots to live together throughout the island in a peaceful and safe Republic of Cyprus.

She informed members that in the summer the Rt Hon. Iain Duncan Smith, MP for Chingford and Woodford Green had, unsuccessfully, tried to persuade the authorities to allow direct flights to the occupied  area and that on November 15th, when members were picketing outside the Turkish Embassy against the illegal UDI, he was celebrating the anniversary of the illegal UDI with the representatives of the illegal regime at the prestigious Hyatt Regency London. She emphasised that members should engage with their political representatives and promote a free, united Cyprus.

Maria Karaolis thanked all the Presidents, Officers and Committee Members of the Association their dedication and hard work.  She also thanked all members, friends, advertisers, providers of raffle prizes and those who had made donations who had supported and sustained the Association since its formation in 1975.  She wished everyone a Happy

Christmas and a New Year, 2019, full of happiness, prosperity and good health; a New Year that brings Freedom, Joy and Justice throughout Cyprus.

She ended her speech by calling for Maria Mouzouris, a long term member of the Association, to come to the front of the hall, where, to her surprise, she was presented with a bouquet of flowers from the Association.  Mrs Mouzouris had an even bigger surprise when a 90th Birthday cake was brought out for her and pastichia given to all present; organised by her daughter Tina. Everyone present sang Happy Birthday to Maria and made her 90th birthday celebration memorable and enjoyable for all.

Members of the Rizokarpasso Association once again demonstrated outside the Turkish Embassy on November 15 2018, on the anniversary of the illegal Unilateral Declaration of Independence by the occupying regime in northern Cyprus