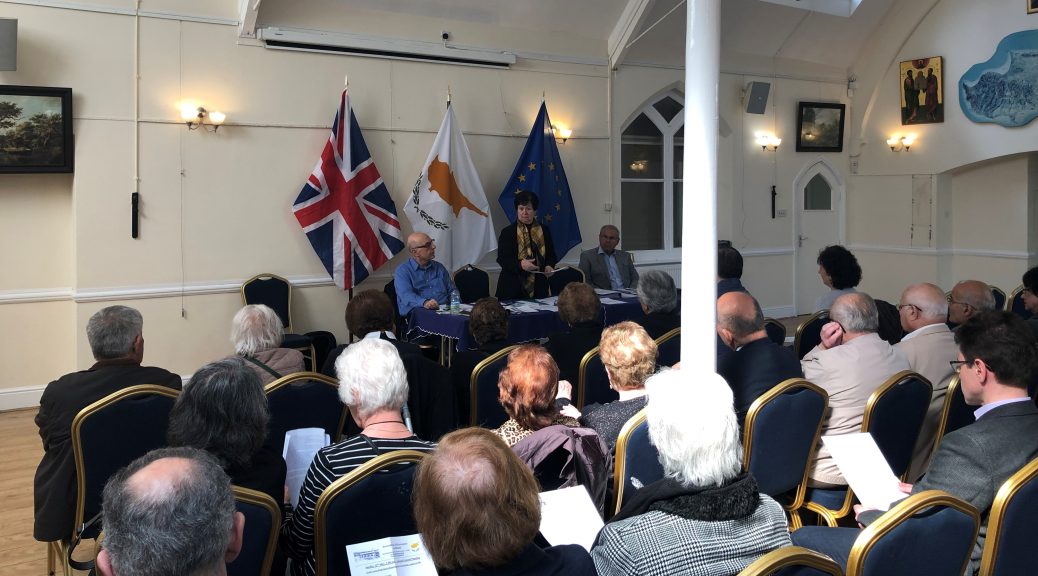 Maria Karaolis, the President, presented a report of the Association’s activities since the last Annual General Meeting.  Andreas Gavrielides, the Treasurer, presented the Financial Report and Tony Vouros the Auditors Report.  The meeting finished with all the members enjoying souvlakia, catching up on news and discussing their arrangements for the Association’s summer trip to Eastbourne on Sunday 23rd June and to the Annual Dinner & Dance of the Association on Saturday 30th November.

The 10 Executive Committee members for the period 2019-2021 are shown below. The strength of the Association is evident by the fact that the committee includes British born Cypriots and members who were born in Rizokarpasso and still have enclaved relatives there.

Today at the Annual General Meeting of the Association of Rizokarpasso in Britain we resolved to call upon you not to waver from the principles that UK Governments have set out regarding human rights and the upholding of international law.  Rizokarpasso had nearly 4,000 Greek Cypriots prior to the 1974 Turkish invasion, they have now been reduced to 228 enclaved Greek Cypriots, who on a daily basis are denied basic human rights, and the properties of the Rizokarpasso refugees have been occupied by settlers from Turkey.

The 1974 Turkish invasion of Cyprus and the continued occupation of Cyprus by over 40,000 Turkish troops and over 200,000 settlers from Turkey violates human rights, fundamental freedoms and social justice and the very principles at the heart of democracy. Turkey is in flagrant violation of International Law and of the relevant United Nations Security Council Resolutions including General Assembly Resolution 3212 (1974).  Furthermore, it is in violation of the Fourth Geneva Convention, which forbids an occupying power to transfer parts of its own population into the territory it occupies.

Turkey has proven time and again that it cannot refrain from interfering in Cyprus’ affairs. Turkey’s rhetoric is clear that it intends to continue to take unilateral actions and use its military power so that Turkey, itself, benefits from Cyprus’ natural resources. There have been countless occasions where the Turkish warship, ‘Barbaros’, has entered Cyprus’ territory without the consent of the Cypriot Government. In the last week, this has escalated as ‘Barbaros’ and the drilling ship, ‘Fatih’ (which translates to ‘Conqueror’ in English), have arrived in Cyprus’ EEZ with the intent to start drilling for natural resources.

The President of the Republic of Cyprus, Nicos Anastasiades, has described Turkey’s recent illegal incursion as a “second invasion” and it comes nearly 45 years after Turkish troops landed in Cyprus in July 1974. Cypriot authorities have taken steps to issue an international arrest warrant for the crew of ‘Fatih’ and all those involved in the illegal drilling operation. They are also examining a series of other possible measures, within the context of EU and International law. Cypriot Foreign Minister, Nikos Christodoulides, has confirmed that Cyprus has submitted the coordinates delineating the boundaries of its EEZ and continental shelf to the United Nations. There has already been strong international condemnation expressed regarding Turkey’s latest actions.

We ask that our UK Government takes sustained action to ensure Turkey removes its warships and drillship from Cyprus’ Exclusive Economic Zone and respects the sovereignty of the Republic of Cyprus and International Law.  The Republic of Cyprus must be allowed to exercise its sovereign and legal right to explore and exploit its natural resources, uninhibited. A sovereign right which must be respected according to international law. At a time when the coalition nations have been using UK bases in Cyprus for global security reasons it is important that powerful nations and international bodies act with integrity to stop Turkey from threatening and violating the independence and sovereignty of the Republic of Cyprus, which is an EU state, a member of the UN and of the Commonwealth and is a democracy that provides stability, support and refuge in a volatile region. . The UK is a permanent member of the UN Security Council, a leading member of NATO and of the Commonwealth, a member of the Council of Europe, is still a member of the  European Union, and has sovereign bases on the island: no other state has such vested historic, cultural, strategic and national interests in Cyprus.

We believe that Turkey’s role as a NATO member should be reviewed and its progress towards EU membership should be frozen until it complies with international law and UN Resolutions. Turkey mistreats its minorities, violates freedom of speech, restricts the media and press. We believe that Turkey should comply with International Law and abide by the values upheld by the UN, NATO, and the Council of Europe of which Turkey is a Member State.  Furthermore, we believe a negotiated solution for Cyprus should encompass: